Childless by Marriage the paperback is here 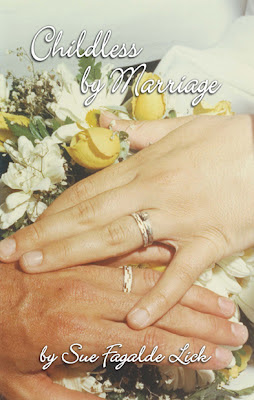 Copies of the paperback edition of the Childless by Marriage book are in the house. All over the house actually. After more than a decade, the book is complete and, for better or worse, it's in print. If you want to help me pay for them and clear up the house by buying many many copies, I'd love it. If you decide not to, keep coming back to the blog anyway.

It's a beautiful book, which I can't believe I'm holding in my hand. In a way, it's my sixth child, following The Iberian Americans, Stories Grandma Never Told, Azorean Dreams, Freelancing for Newspapers, and Shoes Full of Sand. (Info at http://www.suelick.com/Products.html). As the baby, it will require extra care until it can stand up on its own.

I have begun to realize that this book, which is very personal, may also be controversial. There isn't one chapter that people couldn't find something to argue about. If you don't have children in this world full of parents, you know that some people just don't understand. They may get angry when I talk about the "mom club." My chapters on step-parenting might set them off. The "childfree" crowd may object to my pro-child stance, might rage about my Catholic orientation, might take offense at what I say about the angry minority who call women who want children "breeders." I'll get guff from people who refuse to admit there are any psychological or physical differences between mothers and women who have never had children. I'll hear from people who believe old age is no different without children than it is with them. I've been in the writing business long enough to know that I'll hear objections about things I never suspected would irritate people. The reviews will probably be either five stars or no stars, love or hate with nothing in-between. Writing is easy; this is the scary part.

I'm really worried about what my father and my church friends will say, but our stories need to be told, and I could not go to my grave without publishing this book. I hope you all will continue to support me in this Child by Marriage life we share. Thank you, all you anonymous and named readers, for all of your love and support. It means a lot to me.

Posted by Sue Fagalde Lick at 9:08 AM

Congrats on getting your book finally in print!

I just came across your blog and am overwhelmingly relived that I'm not alone. There are two main camps regarding couples who are not parents: those who are desperately infertile or those who are "child-free by choice" -- and my relationship falls into neither. I am married to a man whom I love VERY much, but am now dealing with the fact that not long after we became married he fell into a depression where he feels disconnected emotionally and consequently can no longer see himself as becoming a father. We have been married for nearly 10 years now, and I am almost 40 and wondering how much longer I can withstand this deep, overwhelming urge to nurture a child. I was hoping that it would lessen somewhat after menopause (I was never into dolls or and daydreamed of motherhood as a girl) but after reading some of your reader's responses I find myself more than saddened. Surely there must be someone out there who wanted children but couldn't because of their spouse -- yet found a way to make peace with their lot in life?

If "Childless By Marriage" offers some solace in the form of positive, life-affirming stories in addition to the understandably devastating sections, I may have to look into purchasing it.

Laura,
Welcome. You are definitely not alone. I'm so sorry you're in this situation. It's one that many of us have shared. I think the feelings do ease up after menopause. They don't totally go away, but really the worst time is when you still have a chance and see that chance slipping away. Once it's done, it's easier to deal with.
I hope the book offers some solace, and I hope this blog does the same.